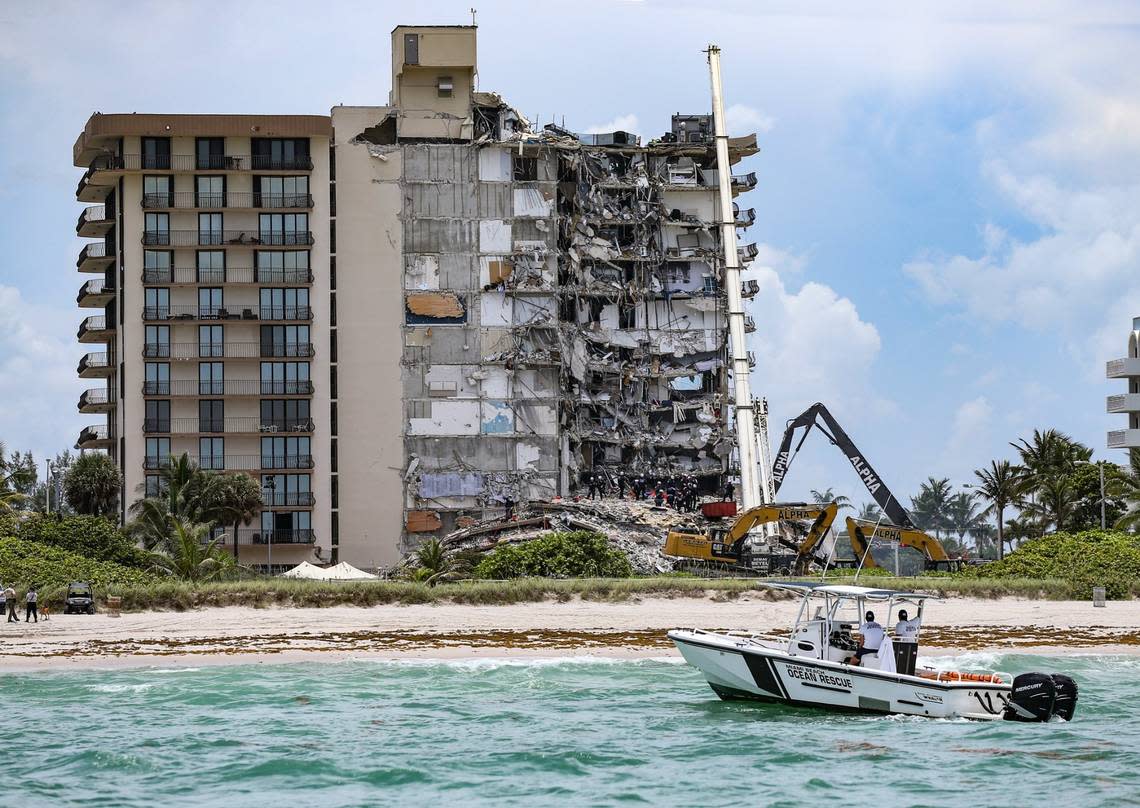 After the Surfside condominium collapse caused doubts about high-rise living in South Florida, local governments are promising closer looks at the safety of older buildings.

In Sunny Isles Beach, home to a canyon of beachfront high rises about five miles from the site of the Champlain Towers rescue site, the city plans to dispatch inspectors for an unprecedented review of aging structures.

Larisa Svechin, the vice mayor in Sunny Isles, said inspectors will review both the inspection paperwork and external structures of buildings in the range of 40 years old or older — a milestone that kicks in Miami-Dade’s requirement for new safety reports and structural analyses.

“It’s pretty much going to be tailored to each building,” Svechin said. The idea is to make sure buildings are complying with the 40-year inspection requirements, a process designed to uncover “all the horrible things that may have happened at Surfside.”

The Champlain Towers South Condo building that suffered the partial collapse overnight Thursday was built in the early 1980s and undergoing repairs for its 40-year recertification from the city of Surfside. A 2018 engineering report used to plan the repairs found a “major error” in the original design of the building that would require significant work on the pool deck area to correct “major structural damage.”

On Saturday, Levine Cava said the county’s building department would launch a 30-day “audit” of residential buildings that are at least 40 years old but have not yet been re-certified by Miami-Dade.

“I’m directing the Department of Regulatory and Economic Resources to immediately begin a 30-day audit of all residential properties 5 stories+ at the recertification point — 40 years or older — that have not completed the process to identify and address any issues,” she said in a statement.

The county audit involves a closer look at hundreds of apartment and condominium buildings outside city limits that are in the county’s 40-year pipeline. That includes 432 “enforcement cases for multi-family residential [buildings] currently in the Unsafe Structures process,” said Tere Florin, a spokesperson for Regulatory and Economic Resources.

Florin said the “unsafe” label is applied to any building that must make repairs or improvements before qualifying for the 40-year recertification and that “these deficiencies are not necessarily related to the building’s structural integrity but must nevertheless be corrected to ensure safe and comfortable living conditions.”

The announcement provided no other details on what’s next, or how many properties were involved. A spokesperson for

On Friday, Miami announced its own expedited look at aging buildings within city limits. The city’s building department plans to ask condominium associations to document the conditions of their buildings, as certified by an engineer. The requests only apply to buildings with at least six stories that are at least 40 years old.

Miami released a draft letter to the associations stating buildings are “strongly urged to retain the services of a Licensed Structural Engineer… to undertake a Structural Inspection for Visible signs of distress.”

Is 40 years too long to wait for recertification?

Miami-Dade’s building code sets the timetable for 40-year recertifications across the county, but the Surfside catastrophe is raising questions on whether four decades is too long to wait for mandated structural checks.

“It’s a fair question to ask,” Groisman said after touring the Surfside collapse site on Friday. He also said local governments should crack down on existing rules. “We need to make sure all of our cities are enforcing their 40-year-certification process.”

In Sunny Isles Beach, inspection work is expected to begin Monday. Svechin, the vice mayor, said 59 buildings are the target.

Of those, 39 have already received their 40-year recertification, while 20 are close to enough to 40 years in age that they’re preparing to apply for city approval.

Svechin said the recertification process for older buildings tends to be an uphill process, with residents having to pay heft assessments to handle repairs that may have been postponed as a building ages.

“Nobody jumps on this, unfortunately,” she said. “The older buildings tend to have older residents with fixed incomes. The costs are very difficult for them to manage.”

Raquel Regalado, a county commissioner representing parts of Miami, said she’s requesting information from the Levine Cava administration to consider amending the county’s recertification laws. One potential change is to limit private certification reports to engineers, rather than the current allowance for architects as well.

She predicted the extra attention toward unsafe structures would lead to reforms in the county’s inspection process, just as 1992’s Hurricane Andrew led Miami-Dade to rewrite its building code.

But Regalado said it’s too early to link a need for changes to the Surfside collapse because authorities haven’t determined whether issues related to the building’s age contributed to the catastrophe.

“We need to collect data…We have to be cautious,” she said. “We don’t want to change our permitting system on a hunch.”