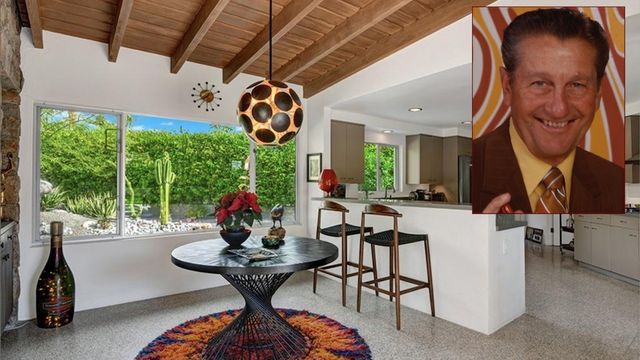 A ranch-style home once owned by one of the United States’ most iconic entertainers is now pending sale.

The premium is worth it for Welk’s former residence. It sits on a third of an acre tucked into the city’s coveted El Mirador neighborhood. And because the Welk Resort Group (now run by his grandson) included a property in Palm Springs, Welk spent a lot of time in the desert. The bandleader died in 1992 at the age of 89.

The Welk Residence is designated as a Class 1 historic property and benefits from the Mills Act, a California state law that allows homeowners of historic properties receive property tax reductions.

For Welk’s former three-bedroom, three-bathroom 1952 home, built as a spec house by the Palm Springs builder Joe Pawling, Dethier said buyers who would appreciate the property were targeted, adding that the marketing pitch focused on the way home sits on its large lot.

“In Palm Springs, of course, it’s orientation. The property has amazing views,” says the agent.

Much of this is due to the walls of windows. Whether you’re lying in bed, whipping up a meal, or working in the home office, views of the private pool and desert are framed.

“When you’re in the living room, you have the juxtaposition of green belt and desert landscape,” says Dethier.

Architectural and interior-design enthusiasts were drawn to original fixtures and other relics, from the baby-blue pedestal sink in one bathroom to the stone fireplace. The seller—a local preservationist, JR Roberts—snapped up the home as is in 2018, and spent the next two years renovating it, guided by a mix of old postcards and private photos taken of the property.

Wood beams were redone, and windows and doors were swapped in favor of period-appropriate options.

“It’s important that the house was restored in a way that keeps the essence of the way it was,” says Dethier. “This one is in line with its original glory.”

A new roof, plumbing, and electrical brought the home up to code. Red-brick wainscoting, faux columns, and aluminum siding—additions by previous owners—were all removed.

To bring the home into modern times, the shag carpeting was ripped out and tossed aside in favor of terrazzo floors.

Even with the changes, original blue and pink sinks can be found in the bathrooms, alongside newer additions, such as a standalone, angular soaking tub and glass-walled shower. In the kitchen, vintage St. Charles cabinetry evokes a bygone era.

Typical of most Palm Springs homes, the property includes a pool. Part of the recent transformation involved creating a sculptural cactus garden, featuring an outdoor lounge and a gas fire pit.

The buyer may be intrigued by the changing demographics of the desert area.

Welk’s variety show can still be seen on some PBS stations.