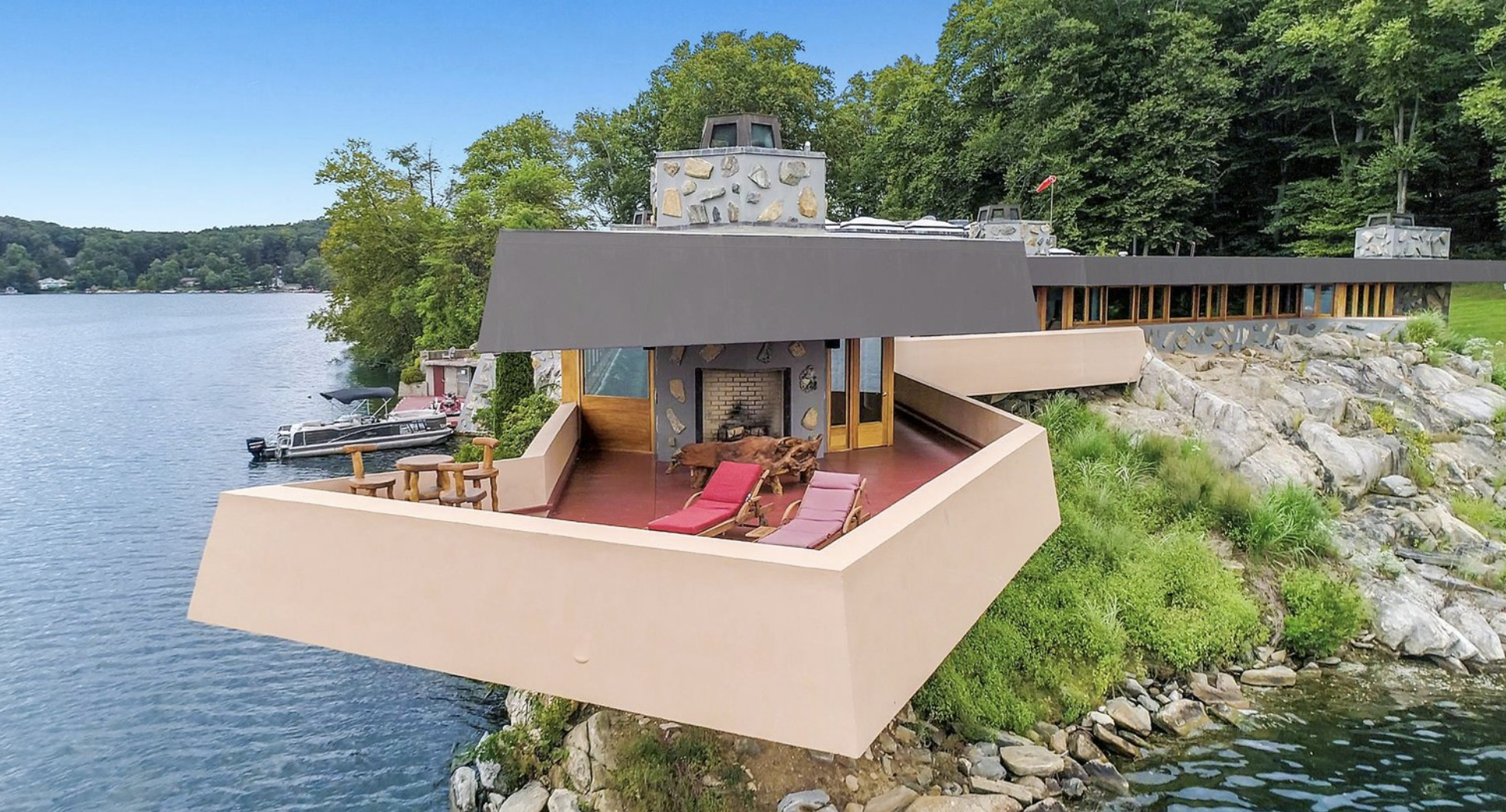 After many years and few nibbles, Joe Massaro has taken his $10 million private island real estate listing off the market — and the Frank Lloyd Wright home and standalone 1950s cottage that come with it.

Even after a roughly $10 million price drop from the original $19.9 million asking price five years ago, there was “not one offer — and I know why, too,” said Massaro, 75, from his primary winter home in Florida. “For a family to live in this house, it’s not the easiest thing in the world.”

The design is not the issue, at least for Massaro. He built the unique home on Petre Island in Lake Mahopac according to Frank Lloyd Wright’s 1949 working plans and has not had an urge to revisit or renovate even one inch of the four-bedroom home since.

But living in a home with architectural significance means it cannot be changed — even as living habits and design preferences have evolved over the past 70 years.

Part of Massaro’s Wright-inspired home juts out an impressive 27 feet over the water, making it one of, if not the, largest cantilever the famous architect designed. It’s 10 feet longer than the one at Wright’s famous “Fallingwater” in Pennsylvania — itself the inspiration for the name Massaro has bestowed upon his home: “Wright Over Water.”

“The pictures do not do it justice. When you go in the living room, you’re like on a ship — you see no land around you. You’re over the water. Every room has a view,” said Massaro.

But the four bedrooms are small by today’s standards — an intentional design choice of Wright’s, to encourage gathering in a home’s communal spaces. And there are only two and a half baths — “which is kind of unheard of for modern houses, you know?”

Still, he is happy he stayed true to Wright’s vision, albeit with a few modifications. (More on those later.)

“It’s a piece of art more than a functional house to me,” said Massaro, who adds that “if Frank Lloyd Wright walked in, he wouldn’t yell at me,” referring to the architect’s persnickety habit of rearranging the furniture in homes he designed if he disagreed with the owner’s placement.

“He was crazy. I would have gotten along so well with him.”

The home took four years to build and since it was completed in 2008, Massaro has summered in the home each year since, so he knows its quirks.

These inconveniences can be a deterrent for families — including Massaro’s own wife, Barbara. Although for Joe, the drawbacks are a plus: “It’s a different place. You’re remote. And you’re only a half a mile from town.”

A summer home just a boat ride from home

This April, Massaro and his wife will fly up from Florida to spend their annual six months, give or take, on Lake Mahopac — he on Petre Island, and she on the mainland in the first home he built on the lake in the 1980s when their two daughters were young.

Barbara prefers to sleep in her own bed, while Joe enjoys his time at the Frank Lloyd Wright house hosting friends and family gatherings. His eldest, Donna, who lives across the street from her parents’ original, mainland home and has her own boat, goes the most often. She’ll sit and look at the lake for a little bit, go up on the roof and have a sunset cocktail, or sometimes just pop in.

“Me and my friends will stop by often to use the bathroom, to make something to eat. And then every year my sister and I have a couple of our girlfriends go out for a girls’ weekend.” As the resident chef — she runs and owns the Freight House Cafe in Mahopac — she’s the one cooking all the meals for the group.

And what does she think of the home’s eclectic kitchen, featuring an enormous rock counter? “It’s such a pleasure to work in that kitchen. It’s kind of an honor to cook in there. It’s set up nicely.” And she likes the rock ledge personally. “It’s fun to work with that.”

She says her mom prefers to stay on the mainland in the Massaros’ first Mahopac home because “she is madly in love with her house.”

And Joe is equally smitten with Petre Island. “I just love staying out there in the summer,” he said. “It’s like you’re in a different world. I mean the island itself is nearly 11 acres and the trees are 250 years old, a lot of them, and it’s just me out there, you know?”

He has everything he needs on the island — satellite TV, internet. “And the views … I take pictures all the time of the sunsets and the sun coming up in the morning … It’s hard to explain how different it is to live it two miles from the other house.”

Though a lake separates Mr. and Mrs. Massaro for roughly half the year, they share meals together a few times a month. “We have a little running joke with the family that he’s out there, she’s over here and they’ll meet in the middle for dinner,” said Donna. “What a life!”

In truth, though, it’s Joe who usually makes the trip to dine with his wife. “I get on the boat and she picks me up at the dock.”

Is it or isn’t it a Frank Lloyd Wright?

Donna still remembers the day her father unwittingly embarked on the Frank Lloyd Wright chapter of their lives.  “I remember him coming down the stairs one day and saying, ‘I’ll be back, I’m going to buy an island.’ He’s a piece of work, really.”

At first Massaro wasn’t aware of the larger Frank Lloyd Wright home design. “We just hung out in the cottage for a couple of years … and that was good enough for us,” said Donna, referring to the two-bedroom, one-bath cottage that the island’s original owner, A.K. Chahroudi, commissioned Wright to design in the 1950s after deciding not to build the more expensive four-bedroom home the famous architect conceived for him.

Upon learning there were plans for a main Frank Lloyd Wright house on the island, Massaro decided in 2001 to bring the late architect’s vision to life. He purchased a set of three small photographs of the working plans from the Frank Lloyd Wright Foundation, and later, Chahroudi’s son gave him copies of Wright’s original plans. Massaro’s architect, Thomas A. Heinz used both to create the construction drawings.

Critics have been casting judgment since. Not all architectural scholars believe Wright’s roughly 500 remaining designs should be built posthumously, and the Foundation itself doesn’t recognize the Massaro home as an official work of Wright’s.

But Massaro contends this is largely because he refused to pay the organization what he felt was an outsize sum for their stamp of approval. And though he didn’t follow Wright’s designs to the letter, doing so would have been an impossible feat given modern building codes and the realities of building a 1950s design in the 21st century — and the Northeast.

For instance, instead of 26 flat, triangular skylights that flood the kitchen and entrance with light, Massaro and Heinz made them domed to stand up to New York snow. He took some creative license, too, adding a helipad, for instance — “I just knew the house needed it” — to make it easier to get on and off the island. (He’s never used it himself, though some fashion shoot crews have.)

Massaro believes Wright would have approved of his additions and attention to detail, which he followed down to the unusual angle Wright used in his tongue and groove ceilings. Given his career first as a sheet metal apprentice and ultimately owner of the multi-million-dollar sheet metal company Elmsford Sheet Metal Works (along with another firm), Massaro himself did all the metal work, from the ducts to the railings. “I was on the job every day,” he said.

As much work as it took to build the house, Massaro is mindful of how much work it would be to look after the home once he is gone. “I don’t want my family to be forced to sell it. They can’t run that place — it’s a lot.” He especially doesn’t want a repeat of what happened to A.K. Chahroudi, whose family was forced to sell the island and the cottage at auction when he left the U.S.

It will be bittersweet when the right buyer comes along. “I mean, it’s such a special place. I would hate to not have it with us anymore,” said Donna.

“It’s going to be a special person that comes along to buy that place,” she continued. “So I am excited for whoever does that eventually — with a little clause in there that we can still have girls’ weekend every year.”