When working from home is much more than emailing 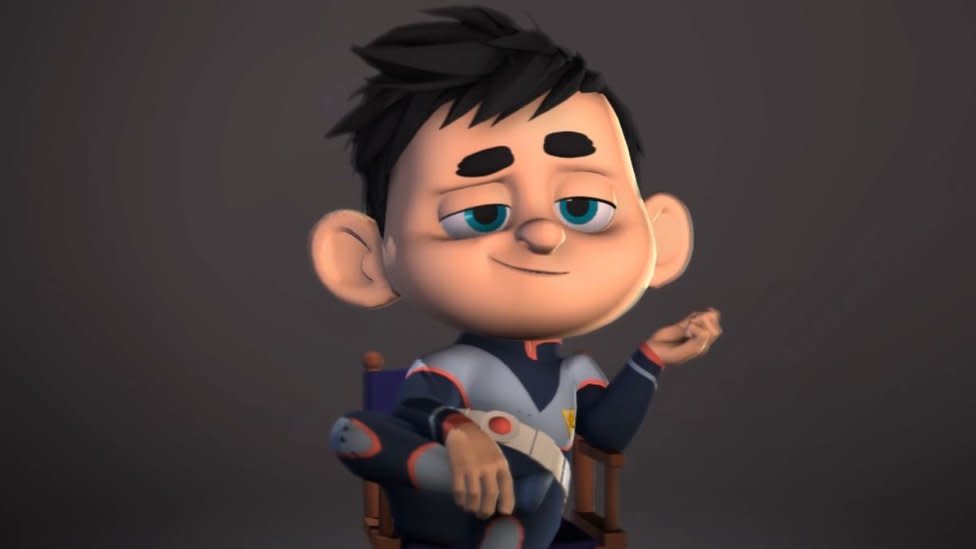 Ere Santos remembers that he once had to animate a fight between his character, the sidekick, and the hero of the film.

The sidekick lands on the hero’s head, and the scene cuts. Luckily, the hero’s animator sat next to Mr Santos.

Much like their creations, the two colleagues went to battle on how the interaction should work.

Instead of drawing, these feature film animators create computer simulations based on physics.

Mr Santos likens it to making a puppet that the computer will bring to life.

Trouble ensues if the build is even fractionally inaccurate, because the puppets will slice through their world like a ghost, rather than a real being.

“You can have a hand going through a table, or through another hand if they are clapping,” says Mr Santos.

Eventually, he and his neighbour ironed out their characters’ skirmish.

Huge data files were shared between them, three to four times a day, but being able to look over his colleague’s shoulder and to check his computer screen was indispensable.

Now Mr Santos is working on another movie, but this time alone, from his London flat.

The cartoon has been divided by scene rather than character and distributed to the 100 or so illustrators working together on the feature film animated by Jellyfish Pictures.

So will animated characters drawn during lockdown touch each other less?

Mr Santos jokes: “I hope so. I mean, anytime you have characters not touching each other in animation is great. Characters interacting with each other – yeah. It’s just a world of like, ‘Oh no.'”

However, the team has still maintained its connection despite their physical separation.

Continually in touch, they take notes from their directors at Jellyfish and their Los Angeles-based movie studio, DreamWorks.

“It’s an interesting challenge that nobody’s ever had to make a movie outside of the office. So it’s really cool and exciting, but also terrifying because you don’t want to mess up,” says Mr Santos.

The interplay between Mr Santos, his colleagues and the movie studio is made possible by cloud computing. That’s where a company decides not to process and store all of its data in its own offices. Instead it hires another firm to store the data, which it can access over the internet.

The technology has been around for almost 10 years.

But since Covid-19 put the world on lockdown, a wave of new firms have rushed to adopt cloud computing.

And within cloud computing a micro-industry, known as enterprise infrastructure, has bloomed.

Enterprise infrastructure is the link between the home and the cloud: a secure connection that the company can design, have managed and in some cases, monitor.

Sometimes this is through software that signs a user into their work network.

In other cases, there is an actual hardware box to be plugged into the home router. A work laptop, tablet or phone can pick up its wi-fi signal and authenticate the user.

These boxes can also prioritise wi-fi speed when parents are on work calls and kids are playing on their games console, or streaming movies.

The products, which for the last 10 years have been used as part of disaster recovery protocols, have seen sales explode since lockdowns began.

A recent research note from Goldman Sachs estimates this industry, which is now worth just under a billion dollars (£790m), could reach a value of $9bn (£7.1bn) in the next five years.

Most also offer IT support, as well.

From his flat in Ealing, London, Mr Santos starts his regular working day by logging into a piece of software, called Teradici, a virtual workstation based in the cloud.

As if he was in the office, the file network of Jellyfish Pictures opens up and he can begin animating, immediately.

But unlike most remote workers who get by on Google Docs, Mr Santos will open up a file composed of layers and layers of animation.

These files are ultimately stored on Microsoft Azure, a cloud storage provider, and backed up at a physical data centre in Hayes.

As if they were characters, the movement of the light, the props and the sets all have a life of their own, occupying hundreds of gigabytes. They would normally require huge computing power to load up, remotely.

The software Mr Santos works with does not actually send him all of the pixels in the picture that he sees on his computer screen.

Over 500 megapixels a second are “remoted” to his monitor in perfect colour accuracy. (One megapixel is a million pixels.) However, they are delivered as smaller, simpler versions of themselves, a bit like a streamed film on Netflix.

This allows several people to work in each scene simultaneously, upload and refresh it while they animate. Each pixel is compressed and encrypted, to keep the movie secret and safe while the animators create their work.

Vancouver-based Ziad Lammam, says his company Teradici, like other cloud software providers, has seen a boom in business since the beginning of the lockdown.

“Finding ourselves at home – that was a real game changer,” he says.

Mr Lammam says it’s been a “journey” to see some movie studio executives use cloud computing and trust that it would work.

Outsourcing any task and allowing third-party firms to handle the security and management of data involves a risk that some producers were at first slow to adopt.

But experts argue that on-site IT is even more vulnerable than data managed in the cloud.

Mr Lammam says that, since the onset of the pandemic, many companies have changed their attitude towards cloud computing.

“A lot of people have said, ‘Wow, yeah, you really saved my bacon,'” he says.

San Francisco-based Alan Ni, director of smart spaces at Aruba, says, “We’ve had our watershed moment in the workplace and I think there’s gonna be some really significant changes coming down the pike with your work from home.”

Aruba, which has been around in various iterations since 2008, is now a wi-fi enabled box that plugs into a router and opens up the office network.

Most of his clients had purchased the Aruba as a disaster provision, says Mr Ni, but since the lockdown began, business has boomed.

Because of its high encryption levels, Mr Ni says it’s a favourite of financial and insurance firms.

Chris Stori, also based in San Francisco, is the senior vice president at Meraki, another enterprise infrastructure box that plugs into the home router. He says: “When Covid hit, we saw unprecedented demand for our products beyond what we had ever planned.”

Overnight Meraki set up remote connections for 1,000 call centre representatives, with all of the apps they needed alongside the security credentials the bank required.

As for Jellyfish animator Ere Santos, he also loves his cloud set-up, especially now that he can work from his newly purchased standing desk at home.

He has even installed voice-controlled coloured lights to decorate his workstation.

Keeping his work on the cloud makes Mr Santos more comfortable that, if his computer crashes, his work will not be lost.

“I can get any computer anytime. And then all I have to do is click back to the server and all my stuff is still there,” he says.